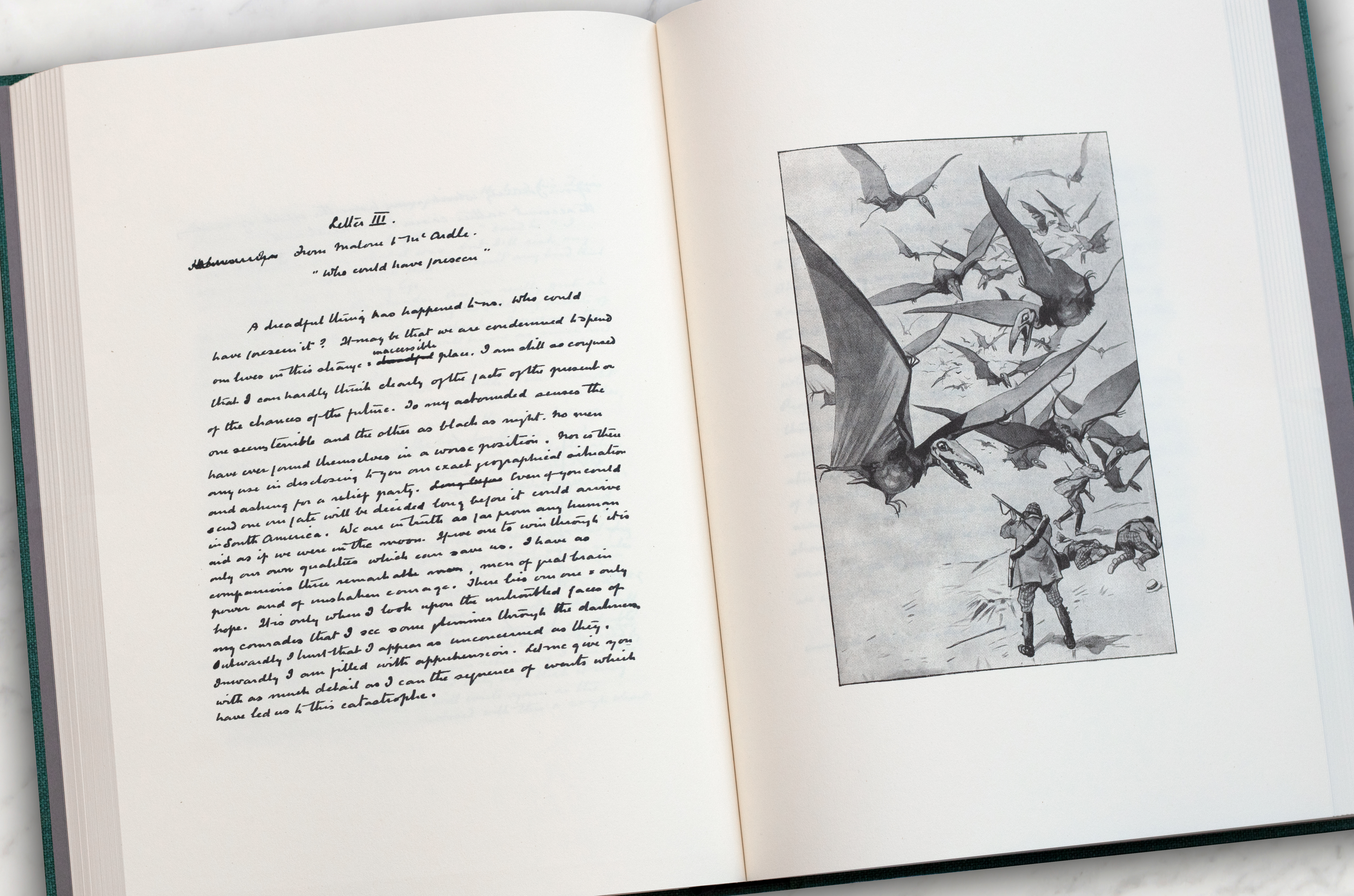 One of the latest collaborations from The Conan Doyle Estate¬†is with the fantastic¬†SP Books - Publisher of Manuscripts.¬†

Their ethos revolves around the unique experience that comes from reading a manuscript - allowing an intimate connection with the author, offering special insight into their creative process through their original workings, corrections, notes, revisions and marginalia. 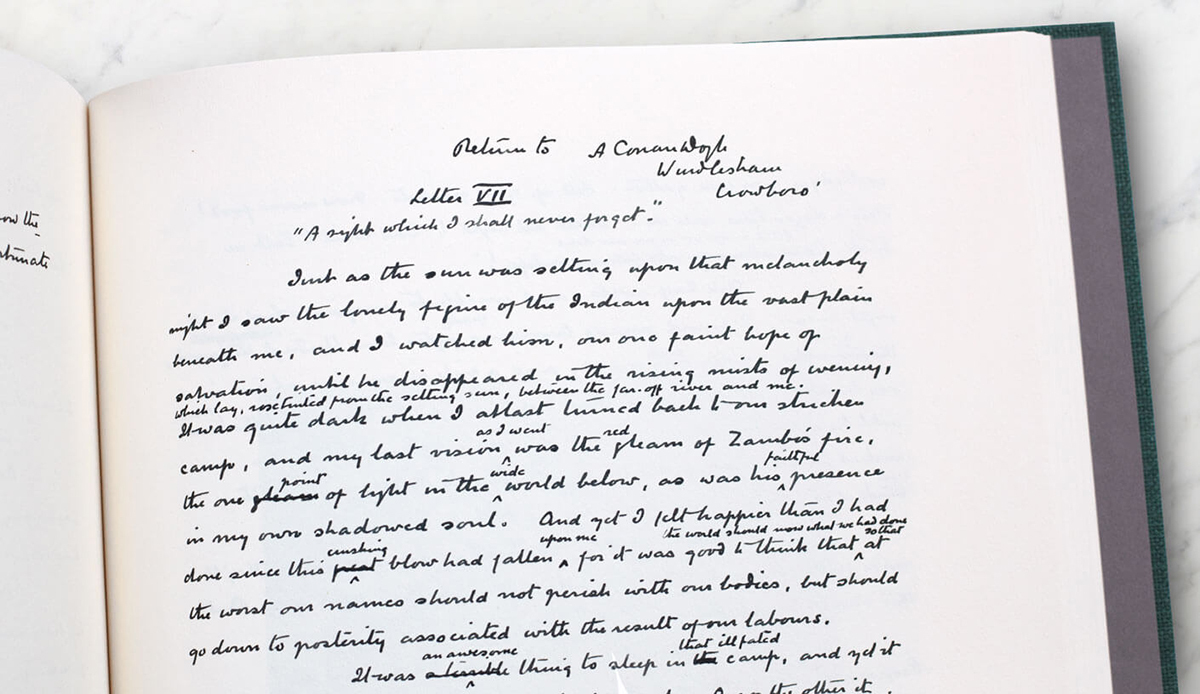 It has been a real privilege to work with SP Books on The Lost World, Arthur Conan Doyle's manuscript - and we are so proud of this magnificent book that is a must for any Conan Doyle fan.¬† 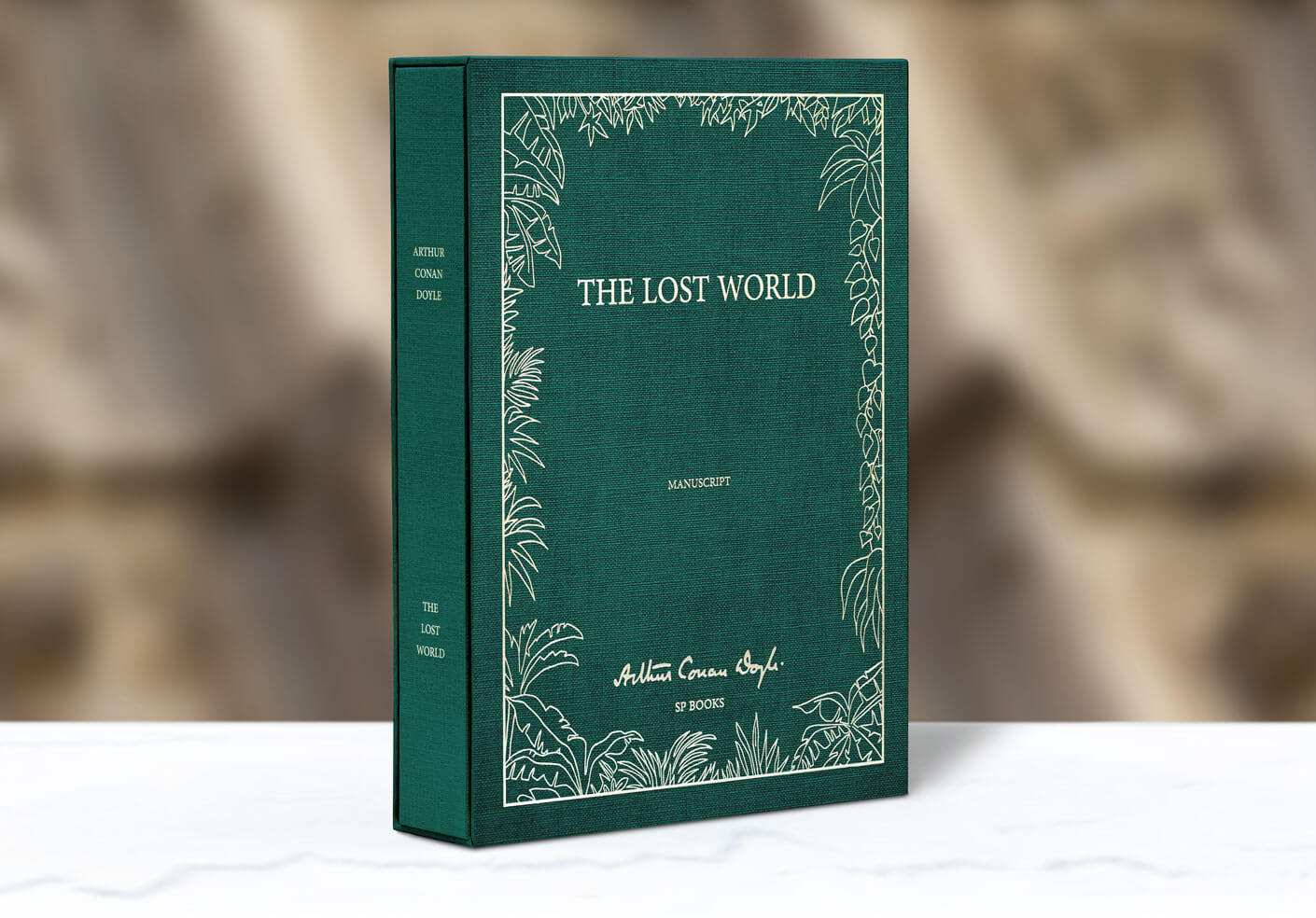 In this edition, the manuscript of¬†The Lost World¬†is reproduced for the first time, showcasing Arthur Conan Doyle‚Äôs handwriting and edits in a graphically restored version of the original.

The manuscript is accompanied with a series of 21 illustrations from French artist G√©o Dupuis.¬†
The book also includes a foreword by Jon Lellenberg. Jon‚Äôs association with the Conan Doyle Estate stretches back to Dame Jean Conan Doyle‚Äôs time in the late 1970s. He is a Baker Street Irregular and a member of The Sherlock Holmes Society of London, and the author or co-author of five books about Sir Arthur Conan Doyle‚Äôs life and work, including 2007‚Äôs award-winning Arthur Conan Doyle: A Life in Letters, done with Conan Doyle biographer Daniel Stashower and the Estate‚Äôs Charles Foley. 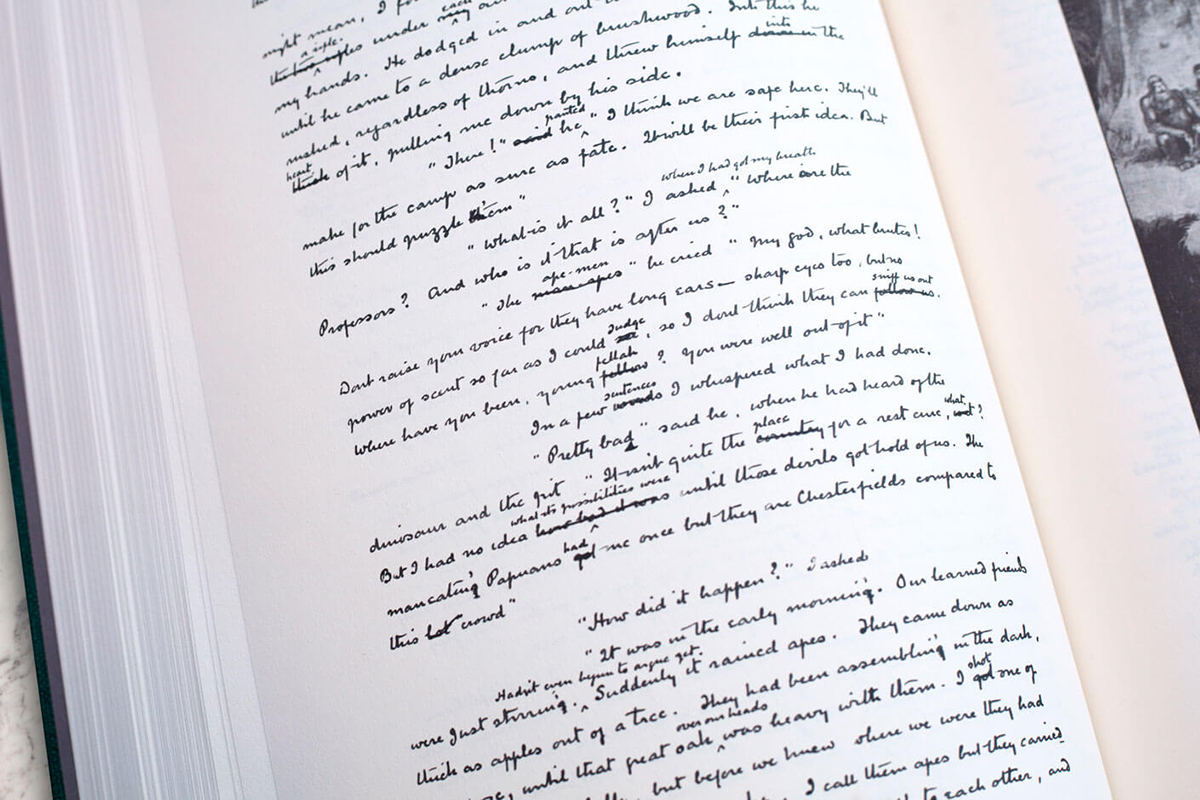 We are very proud that this edition was produced in close collaboration with our team at the Conan Doyle Estate and the New York Public Library‚Äôs Berg collection, where the original document is kept. It is numbered 1 to 1,000.

Read more at SP Books - and don't delay on getting your hands on one of these glorious books!¬†

Over to SP Books

‚ÄúNow, nearly a century later, it is not a question of if another dramatization of The Lost World will appear, but when. And this manuscript was the start of it all.‚ÄĚ Jon Lellenberg, 2020

- With a series of 21 illustrations and a foreword by Jon Lellenberg, American agent and advisor to the Conan Doyle Estate, and author of five books about Doyle‚Äôs life and work

- In collaboration with The Conan Doyle Estate Ltd. and the New York Public Library‚Äôs Berg collection.

At the start of the 1910s, Arthur Conan Doyle already had eighteen novels and nearly seventy short stories to his name. He had created the famous private detective Sherlock Holmes over twenty years prior, and had published several historic novels alongside his crime writing.¬†

However, inspired by the works of Jules Verne and H. Rider Haggard, he was conceiving of a new novel: a voyage of discovery into the depths of the unexplored Amazon jungle, to an isolated plateau where prehistoric creatures ‚Äď dinosaurs among them ‚Äď still roamed.¬†

At the time he wrote the novel, the term ‚Äúdinosaur‚ÄĚ had been around for less than two centuries.¬†

Leading the expedition, ‚Äúone of the most remarkable . . . of all time‚Äô, alongside Edward Malone, Lord John Roxton and Professor Summerlee, was Doyle‚Äôs newest creation: Professor Challenger. A brilliant scientist, but given to fits of anger and violence, Challenger is the exact opposite in character to the coldly intellectual Sherlock Holmes. Inspired by a physiology professor Doyle had encountered at medical school, the author wrote that this character ‚Äúhad always amused me more than any other which I had invented‚ÄĚ.

A tremendous and enduring success¬†

By the beginning of autumn in 1911, Arthur Conan Doyle had already sketched out the plot of his new novel. The 292 pages of this manuscript were written in just a few months at Windlesham Manor, his home at Crowborough (East Sussex) and finished on 3 December 1911. Serialised in the Strand Magazine from April 1912, it was published in book form in October 1912. The Lost World and its characters were a tremendous success with the public, marking the start of a long and diverse series of imitations and adaptations. In his final years, Conan Doyle returned to Professor Challenger in two more novels and two short stories.

The manuscript of The Lost World is written in a uniformly neat and very legible hand. Like most of Conan Doyle‚Äôs manuscripts, it includes occasional additions but not very many deletions. For example, a large paragraph about interpreting the passage of time through fossils is crossed out, but is included later on. Though it is ‚Äúrisky to conclude too much from a manuscript,‚ÄĚ writes Jon Lellenberg, it is impossible not to observe that ‚ÄúConan Doyle‚Äôs handwriting becomes ‚Äėbusier‚Äô in the course of composition and not to feel the author‚Äôs excitement and impatience to reach the climax‚ÄĚ.¬†

In the process of writing, Conan Doyle got so fond of his character Professor Challenger that with the help of two friends he prepared a series of fake photographs featuring them as the novel‚Äôs main characters ‚Äď a ‚Äúgreat joke‚ÄĚ which appealed hugely to his sense of adventure.

Doyle himself was disguised behind a voluminous false beard and bushy eyebrows as Professor Challenger, with his brother-in-law as Ned Malone and the photographer himself doubling up as Summerlee and Roxton.¬†

About the Conan Doyle Estate Ltd¬†

SP Books is an independent publishing house founded in Paris in 2012. SP Books are committed to the preservation of literary heritage, venturing into the vaults of some of the world‚Äôs greatest libraries, institutions and private collections to unearth hidden literary treasures. The American-English collection started with Jane Eyre, The Great Gatsby, The Picture of Dorian Gray, and Frankenstein.

SP Books
< Next Previous > < All news