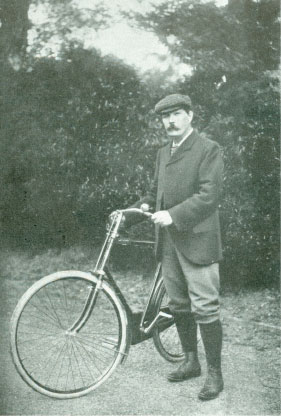 Arthur Conan Doyle was a legendary adventurer and a man who embraced sports with extraordinary levels of vim and vigour. He was described by P.G Wodehouse in 1903 as being 'immensely powerful in build and the keenest of sportsmen'.

“I have never specialised, and have therefore been a second-rater in all things,” said Arthur Conan Doyle of sports in his autobiography Memories and Adventures: “I made up for it by being an all-rounder, and have had, I dare say, as much fun out of sport as many an adept.”

So much so, that he devoted an entire chapter there to Sport. From boy-hood on, into his fifties, he played cricket, rugby, football, and other team and individual sports. In Southsea, as a young doctor, he played goalkeeper for the amateur Portsmouth Association Football Club, predecessor to “Pompey,” today’s Portsmouth Football Club. Sports influenced his writing greatly as well, partly in what literary historian Douglas Kerr calls, in his Conan Doyle: Writing, Profession, and Practice, “stories of masculine heroism and adventures in the domains of war, empire, and exploration.”

“When the spirits are low, when the day appears dark, when work becomes monotonous, when hope hardly seems worth having, just mount a bicycle and go out for a spin down the road, without thought on anything but the ride you are taking.” - A. Conan Doyle

Arthur Conan Doyle's 'anything is possible' spirit and sense of sporting adventure has also been transferred to Sherlock Holmes - who exclaims in The Priory School, from The Return of Sherlock Holmes

"Well, well!" said Holmes, impatiently. "A good cyclist does not need a high road. The moor is intersected with paths and the moon was at the full..."

We wonder if that's based on first hand Arthur Conan Doyle experience! We have a feeling it must be...

Hat's off to all of those night time moorland cyclists picking their way along paths by the light of the moon!