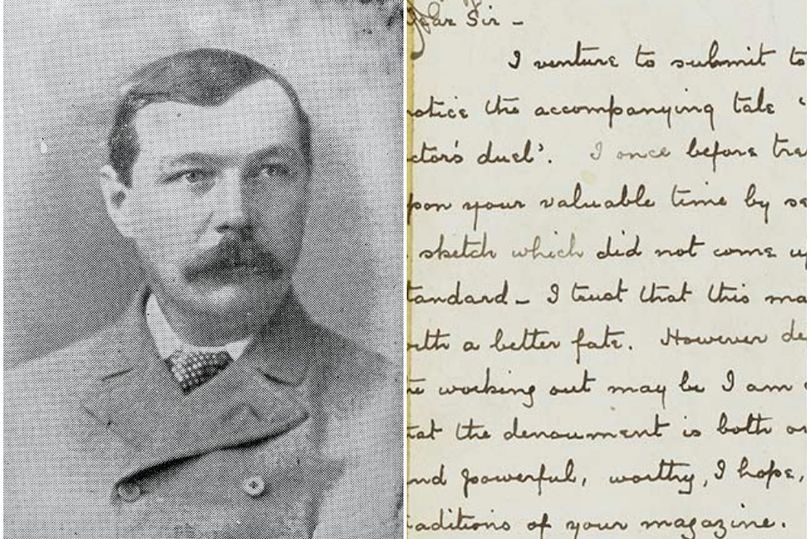 There is a fascinating letter written by legendary Sherlock Holmes author Sir Arthur Conan Doyle which remains in Edinburgh to this day - reports Edinburgh Live.

Exactly 160 years ago today the famous writer was born at an address on the city's Picardy Place – just a stone's throw away from the popular Conan Doyle pub on York Place.

The author went on to create one of the most famous fictional detectives in the world – with his storytelling treasured by millions of Sherlock fans worldwide.

However, an intriguing letter which remains at the National Library of Scotland on George IV Bridge to this day, reveals that his work wasn't always so appreciated.

The note was sent by Conan Doyle in 1882, when he was in his early 20s and before Sherlock had been created, to Blackwood's Magazine in a bid to have his short story 'The Actor's Duel' published.

In the letter he reveals that the publication earlier turned down one of his stories, which was later revealed to be The Haunted Grange of Goresthorpe, and he was hoping his latest work wouldn't suffer a similar fate.

"Dear Sir. I venture to submit to your notice the accompanying tale 'The actor's duel'. I once before trespassed upon your valuable time by sending up a sketch which did not come up to your standard – I trust that this may meet with a better fate. However defective the working out may be I am conscious that the denouement is both original and powerful, worthy, I hope, of the traditions of your magazine."

The tale eventually ended up being published under new name The Tragedians in Bow Bells Magazine in August 1884 – so there was once again no luck with Blackwood's.

It tells the story of a Parisian actor who stumbles upon three men trying to abduct his sister after returning home from winning a big role.

He manages to stop the abduction but finds out that one of the men responsible is a colleague and actor who plays the role of Hamlet in the same play.

As a result he challenges him to a duel – and they need to settle it during their next performance.

We'll not spoil the rest, but the story well worth a look – even if Blackwood's Magazine didn't think so.

edinburghlive.co.uk
< Next Previous > < All news