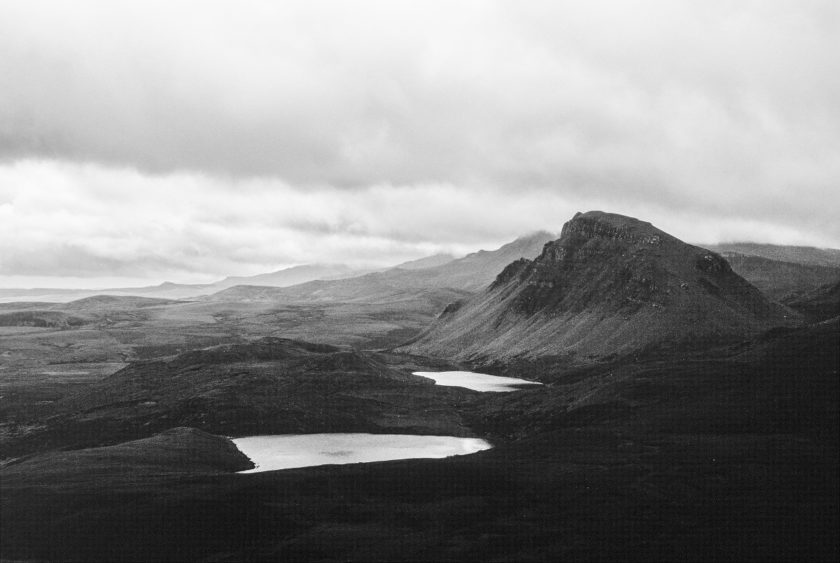 Writer, doctor, soldier, political campaigner, spiritualist - Arthur Conan Doyle was many things, not least a passionate and prolific photographer, who in his time authored 13 articles for the British Journal of Photography.

The article below, published in British Journal of Photography in October 1881, was Conan Doyle's first ever signed essay. It describes a trip he took with two friends to the northern Scottish Isle of May.

While his chums - named as "Chawles" and The Doctor - are there to shoot birds, for Conan Doyle the expedition is a chance to hone his photographic skills.

It's clear as he explores the caves and wilderness the island offers that the writer's love of large-format photography is bound up with a love of adventure - a motivation echoed by today's new large-format photography pioneers, the Intrepid Camera Company. And like Intrepid's founder, Maxim Grew, Conan Doyle designs a camera to meet his own requirements - even building a tripod and lenses himself.

The article moves between detailed technical descriptions of his photographic process and laugh-out-loud accounts of his chums' antics as they knock back tumblers of toddy, flirt with local barmaids and generally make a nuisance of themselves. Reading this, we can't help but wonder whether The Doctor might have inspired the character of Dr Watson, who would appear six years later to narrate the first Sherlock Holmes story, A Study in Scarlet. We'll leave that for you to decide.

Read Part One, Arthur Conan Doyle, the Photographer on the British Journal of Photography.

Did you know that the renowned author of Sherlock Holmes was a passionate photographer?

In the second in our series of republished archive articles by the Sherlock Holmes author and erstwhile BJP writer, Conan Doyle finds that shooting large-format doesn't always go to plan.

Nostalgia for early photographic techniques might not be as novel as we think if this article by Arthur Conan Doyle, published in BJP in November 1882, is anything to go by.

As in the first article in this series, After cormorants with a camera, Conan Doyle reports back here on a large-format photography jaunt with friends. "The Commodore", the instigator of the trip this time, is, we're told, "an ardent supporter of collodion" who "revels in every process which the rest of the fraternity have agreed to abandon."

No doubt the Commodore would have thoroughly approved of the Intrepid Camera Company's mission to resurrect large-format photography for today's photographers with their affordable lightweight 8x10 and 4x5 cameras.

And that's not all they share. Like the team behind Intrepid, the Commodore loves nothing more than escaping to the wilds, with his large-format camera. When given three days holiday from his dull office job, the Commodore grabs his "fossil apparatus" and heads straight to Conan Doyle to invite him on an expedition to Dartmoor.

Unearthed from the BJP archives, this article from 1883 - one of 13 that he penned for BJP - reveals the writer's love of photography and travel.

Published 17th August 1883, the third in our series of archive articles by renowned author and regular BJP writer Arthur Conan Doyle begins in a similar way to the previous two, After cormorants with a camera and Dry plates on a wet moor.

A friend - Cunningham, "most enthusiastic of dry-plate workers" - drops in on Conan Doyle in his Edinburgh apartment to invite him away on a trip, along with two others Smith, a fellow large-format photography enthusiast, and Ramsey, a painter. But this time the destination is further afield - Ireland.

Booking their tickets, the travel agent warns that these are "dangerous times in Ireland," but being adventurous types - much like the large-format photography lovers behind the Intrepid Camera Company - the bunch aren't put off: "our trip could hardly fail to have interesting results". They're not wrong. On the long boat journey, together with the boozing and partying we've come to expect from Conan Doyle and his crew, there are stunning descriptions of the scenery: half-finished ships "with their gaunt ribs sticking up to heaven", calm water that reflects the "scarlet tinge of the clouds."

Of course, the trip doesn't go entirely to plan and his large-format photography of varied subjects - landscapes, woodlands, wild birds, villagers, churches, and the place where the first potato was said to have been planted in Ireland by Sir Walter Raleigh - has varied results. But the excursion does make Conan Doyle revise his idea of Ireland. Although he spots some "seditious" posters, he's "surprised at the civility we met with and at the order of the streets" in Dublin, while an encounter with a traditional Irish peasant leads him to conclude: "Truly travel enlarges men's minds!"

Credit to British Journal of Photography
< Next Previous > < All news