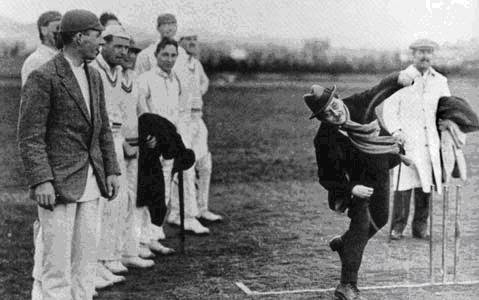 For whatever reason-perhaps because writing can be a rather solitary venture-literary types have long gathered together in search of other pursuits. A modern example is Stephen King’s band, The Rock Bottom Remainders. Members of the band have ebbed and flowed over the years, but the lineup has at various times included Amy Tan, Mitch Albom, Dave Barry, Ridley Pearson, Matt Groening, James McBride, and Scott Turow.

But in the late 1880s, writers couldn’t exactly pick up an electric guitar to blow off some steam. Instead, J.M. Barrie, author of Peter Pan decided to form an amateur cricket team, and recruited many of his famous friends to join him.

Just like The Rock Bottom Remainders, the lineup was constantly revolving. A few of the writers that participated included:

Intending to poke fun at their own abilities, the group called themselves the “Allahakbarries.” They were under the impression that “Allah akbar” meant “Heaven help us” in Arabic. (It actually means “God is great.”)

As you might expect, the athletic performance of such an eclectic group of creatives was a bit of a mixed bag. While some members of the team, including Arthur Conan Doyle, were quite proficient at cricket, others were not so athletically inclined. One showed up in pajamas, and Barrie discovered that another didn’t know which side of the bat to hit with.

Though he was a good player, Conan Doyle had his share of mishaps, too-like the time he accidentally set himself on fire while playing a non-Allahakbarries match. He was up to bat, and the pitch hit him in the thigh, striking a box of matches he had in his pocket. In his own words:

“A little occasional pain is one of the chances of cricket, and one takes it as cheerfully as one can, but on this occasion it suddenly became sharp to an unbearable degree. I clapped my hand to the spot, and found to my amazement that I was on fire. The ball had landed straight on a small tin vesta box in my trousers pocket, had splintered the box, and set the matches ablaze.”

Occasionally, the Allahakbarries were even the more experienced team. When they played a team called the Artists, one of their players was overheard talking about how he wasn’t about to sacrifice his painter’s hands for “a dirty leather ball.”

But from their debut in 1887 until their final match in 1913, the team was never overly concerned about winning. “We played in the old style, caring little about the game and a good deal about a jolly time and pleasant scenery,” Conan Doyle later wrote. “There were many whimsical happenings, which were good fun if they were not good cricket.”

Credit to Stacy Conradt, Mental Floss.
< Next Previous > < All news