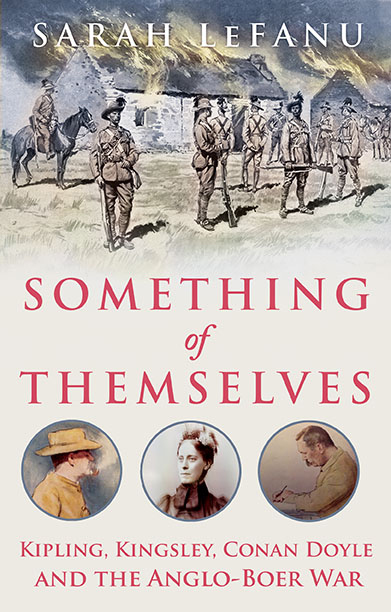 In any uncertain times - one thing we've always found a comfort is to reach for a good book! This is absolutely one of these times...¬†

Moving forwards - we thought¬†it would be helpful when we came across a good pastiche or an Arthur Conan Doyle related novel to pass on recommendations¬†to read - and/or reviews that we've enjoyed.

Next Up... Something of Themselves by Sarah LeFanu

In early 1900, the paths of three British writers‚ÄĒRudyard Kipling, Mary Kingsley and Arthur Conan Doyle‚ÄĒcrossed in South Africa, during what has become known as Britain‚Äôs last imperial war. Each of the three had pressing personal reasons to leave England behind, but they were also motivated by notions of duty, service, patriotism and, in Kipling‚Äôs case, jingoism.

Sarah LeFanu compellingly opens an unexplored chapter of these writers‚Äô lives, at a turning point for Britain and its imperial ambitions.¬†Was the South African War, as Kipling claimed, a dress rehearsal for the Armageddon of World War One? Or did it instead foreshadow the anti-colonial guerrilla wars of the later twentieth century?

Weaving a rich and varied narrative, LeFanu charts the writers‚Äô paths in the theatre of war, and explores how this crucial period shaped their cultural legacies, their shifting reputations, and their influence on colonial policy.

Last year, Jon Lellenberg was handling a writer's application for quotations from Conan Doyle's works and letters etc for¬†Sarah LeFanu 'Something of Themselves:¬†Kipling, Kingsley, Conan Doyle and the Anglo-Boer War.'¬†

Sarah has kindly sent Jon a copy - who has read its Conan Doyle chapters prior to his actual arrival in South Africa for the Boer War, and has been very impressed with the job Sarah has done.¬†

Sarah has also credited The Conan Doyle Estate for permissions and books of ours like¬†Arthur Conan Doyle: A Life in Letters, in particular where her coverage of him's concerned.¬†

Buy Your Copy via Hurst Publishers