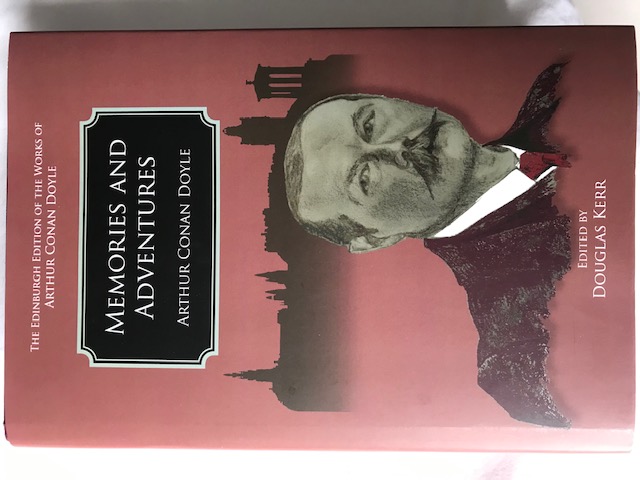 The Edinburgh Edition of the Works of Arthur Conan Doyle

The Conan Doyle Estate is helping to sponsor a scholarly edition of Conan Doyle’s writing produced by Edinburgh University Press. The first of many books has now rolled off the presses – Sir Arthur’s autobiography Memories and Adventures.

Douglas Kerr*, General Editor of the Edinburgh Edition, answers some questions about it.

Why?
A scholarly edition serves the study of an author. It is also perhaps the strongest indication that the author is ‘canonical’, and considered worthy of study. Conan Doyle has always been popular, and he still is. But until quite recently he barely figured on college syllabi, and attracted little attention from academic critics. The study of literature has evolved, however, and the assumptions behind it have changed. Genre writing – such as crime or medical stories, science fiction, the Gothic and the supernatural, imperial romance and adventure tales – is of great interest to today’s students, and is producing a substantial body of scholarship and criticism. There is a growing recognition of Conan Doyle’s importance in the history of literature.

Edinburgh University Press therefore decided to embark on a scholarly publication, which will serve Conan Doyle’s readers by providing the resources of an authoritative text and a detailed context, and a repository of primary source material, in an edition that will not date and that will become a seminal source of reference for the foreseeable future.

What?
Between twenty and twenty-five volumes are envisaged, some of them containing more than one work (A Study in Scarlet and The Sign of Four will come out in a single volume, for example). Even so, a Complete Works is not contemplated. Conan Doyle wrote prolifically and some of his work, if republished now, would not necessarily enhance his reputation, such as his early (1998) Mystery of Cloomber, an immature novel of the supernatural he deliberately omitted from the 1903 Author's Edition of his works.

But besides the main groups – the stories of Sherlock Holmes, and those of Professor Challenger and Brigadier Gerard – we intend to produce scholarly versions of all his most interesting writing, and to represent the great variety of genres, fictional and non-fictional, in which he worked.

Conan Doyle’s writing can be read and enjoyed in many different forms. The first job of a critical edition is to establish, as far as possible, an authoritative version of the text. This involves collating all significant variations among the different textual ‘witnesses’ in which the author had a hand, and making decisions about each one. The witnesses might include the manuscript, the serial version such as instalments in the Strand Magazine or elsewhere, the first British and the first American book editions, and significant rewritings, such as any made for the Author’s Edition of 1903, or the revised version of Memories and Adventures, published after Conan Doyle’s death in 1930.  The history of the publication and the process of collation and emendation will be described in a substantial textual essay, and recorded in the edition’s critical apparatus. Faced with a number of textual witnesses, the scholarly editor has the job of producing a text that seems to approximate to the author’s intention, as well as this can be determined. At the same time it has to be recognised that every published text is a ‘social text’, a collaboration between author, editors, illustrators, compositors, publishers, institutions like magazines and publishing houses which have their own house style, or like the laws of copyright and obscenity, and more opaque entities including the work of predecessors and contemporaries, and the tastes and reading habits of the public for whom he or she writes. The scholarly edition takes due note of all these factors.

An edition should do what it can to historicise the texts. They have to be located in the issues and developments of their own time and in their contexts, biographical, professional, intellectual, literary-historical. Their reception by contemporary reviewers and critics can also be revealing. Without this contextualisation the fullest appreciation is not possible. But the history out of which a work is born begins to fade as soon as it appears; the scholarly editor tries to revive it and preserve it. This historicisation may bypass the casual reader, but it offers the student of literature, and the serious enthusiast, a full and steady light by which to peruse the text.

In the same spirit, there are references in the text which may puzzle the twenty-first-century reader. Locutions, and things, fall out of use: people and events, no doubt recognisable to a reader of the Strand Magazine in 1891, fade from the picture. What were a spirit case and a gasogene (A Scandal in Bohemia)? What was a moonlighter (The Green Flag)? What were Durrant’s Press Notices, and what kind of magazine was London Society (Memories and Adventures)? The edition can help to recover these things, in the form of explanatory notes, for the curious. Meanwhile the editor’s introduction has space to lay out in greater detail frames of reference of more than passing importance to the stories – like the history of the Mormons (A Study in Scarlet), or what went on in the four hundred registered Spiritualist churches in Britain in the nineteen-twenties (The Land of Mist). Other relevant documents, from Conan Doyle’s journalistic writing for example, or dramatised versions of some stories, may be appended to the text. The aim of this, as of every scholarly edition, is to establish the text, embed it in context, and offer the reader and student all possible help towards a well-informed and enriched reading. Unlike plenty of other academic productions, scholarly editions do not go out of date.

Who?
There is an editorial board of senior academics to give guidance to the project, and individual volume editors based in Scotland, England, Ireland, the United States, and Canada (all countries dear to Conan Doyle), specialists in Conan Doyle and the literature of the period. I am the general editor and author of Conan Doyle: Writing, Profession and Practice (Oxford UP). Three other volume editors have written monographs on Conan Doyle: Catherine Wynne’s The Colonial Conan Doyle, Jonathan Cranfield’s Twentieth-Century Victorian: Arthur Conan Doyle and the Strand Magazine, and Andrew Glazzard’s The Case of Sherlock Holmes. Several others have edited Conan Doyle in different editions, and published studies of crime or Gothic fiction, the historical novel, Spiritualism, periodical culture, popular fiction, etc. Michelle Houston is the Edinburgh University Press editor overseeing the work.

When?
Scholarly editions are a lot of work, and well known to move at a sometimes glacial pace. This one, like plenty of other academic enterprises, has also been badly affected by the pandemic, which has made it difficult for editors to visit libraries and consult archives, besides tying many of them down with the extra burdens associated with remote teaching and learning. Nevertheless, a dozen volumes have been assigned to individual editors and proposals for seven of these have now been approved by the Press publications committee. Doyle’s autobiography, Memories and Adventures, is now published and will be followed by a steady stream of others – in order of completion, not in chronological order.

The whole suite of volumes is not yet finalised, and some decisions are yet to be made about the contents of the later ones. It is hoped that this will give the general editor a temporary escape route when cornered by enthusiasts demanding to know why The Doings of Raffles Haw, or Three of Them, have not yet appeared.

*Douglas Kerr is Honorary Research Fellow at Birkbeck College, University of London, and Honorary Professor of English and former Dean of the Faculty of Arts at the University of Hong Kong.