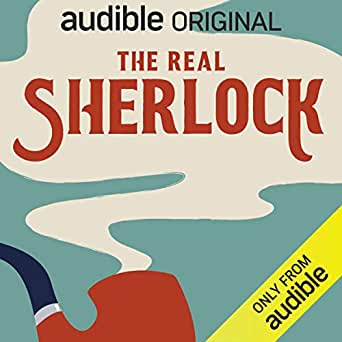 One of The Conan Doyle Estate's latest licences is with Amazon Audible. We assisted with content for this 6 episode series with expert knowledge thanks to Estate Family members and Estate expert Jon Lellenberg. We also gave access and insight into original material from the Family archive.Ā

Sherlock Holmes is the most portrayed fictional character of all time, and he has been reimagined by actors, playwrights and directors over centuries - but who is the creator behind the detective?

Arthur Conan Doyleā€™s own life was often stranger than fiction, and his most famous charactersā€™ stories and personalities bear more than a passing resemblance to his own life and his closest friends. Biographer and broadcaster Lucinda Hawksley gains unprecedented access to a treasure trove of Doyleā€™s never-before-seen personal letters and diaries. This is a chance for Sherlock fans to see their detective hero and his creator as theyā€™ve never seen them before.
Through interviews with Doyle aficionados, academics, actors and family members, we explore Doyleā€™s travels and sailing adventures across the globe, his pioneering work as a doctor, his life in the Freemasons and his fights against miscarriages of justice. As well as his many triumphs, we will also explore the challenges he faced, from the death of his first wife and son to the initial rejection he faced as an author.

We will also look beyond Sherlock to Doyleā€™s other great works including his fantasy and science fiction novels and hear how one of his most famous -Ā The Lost WorldĀ - part-inspired Michael Crichtonā€™s book of the same name, which became the successful Jurassic Park film franchise.

This is an Audible Original Podcast. Free for members.Ā

Download now via Amazon Audible
< Next Previous > < All news